While there have been no talks for several months our chairman Dood Pearce has been busy doing some local research………..

May 7th marks the 75th Anniversary of V E Day, at the end of World War II.  What was happening in the weeks surrounding the end of the war and what celebrations took place in Newent.

As the end of the war was in sight the Evacuee Rest Centre was closed down on 19th March as it was no longer required.  However the war was still going on and a concert was held on April 12th in St Mary’s Church in aid of the Red Cross Prisoners of War Parcels Fund.

The surrender of Germany was announced by the Prime Minister at 3-00pm on Tuesday May 8th  1945.  Within a very short time the bells of St Mary’s Church rang out and continued for the rest of the afternoon.  Flags and streamers began to appear on every street in the town.

A special service of thanksgiving was held in St Mary’s Church at 6-30pm and again at 8-00pm, and repeated the next day at 11-00am.  In compliance with the King’s wishes the following Sunday was observed as a National Day of Thanksgiving.

On the Sunday afternoon a procession assembled at the Grammar School (now the Community Centre) under the direction of Major Moore MC, and was led by the Police, and the Gloucester Park St. Mission Band.  The Parade included HM Forces, US Forces, Army cadets, British Legion, Rescue and Demolition Squad, Girl Guides, and other youth organisations.  The procession proceeded to St Mary’s Church where every seat was taken.  The Parade reassembled after the service and was dismissed in the Market Square, where the band played a most enjoyable musical programme.

There had been little time to prepare any official civic festivities so Dr Johnstone threw open the grounds of the Holts (where the Health Centre is now) for the entertainment of the community.  Treats were arranged for the children in several parts of the Parish.  Under the auspices of the Church Council a Victory Party was held on the Rectory Lawn to celebrate the safe return of Prisoners of War who included; Frank Day, Arthur Lodge, Ivor Markey, J Baker, H Oliver, and Norman Smith.

On July 1st the Civil Defence held their last Parade.  They assembled at the Grammar School and marched through the town.  In December the Newent RDC presented an Illuminated Manuscript to Mr F G Knight who had been Chief Warden of the ARP throughout the War. Knight’s Way is named after him.

During the war a fund was started to build the Memorial Hall, but this took a long time and the building was not finally opened until 1954.

There were many stories of heroism and tragedy coming to light at the time. Some of happiness and some of sadness.  Mr Michael Beaman had been involved in the D-Day landings and was awarded the Military Cross.  At the end of the war he landed at Kemble and then had to find his own way home.  Despite wearing his medals no-one offered him a lift and he had to walk over 8 miles.

Despite the celebrations we were still at war with the Japanese so the struggle was not yet over, and whilst we should celebrate the anniversary of the end of the war in Europe we should also remember those who did not come back.

I could not find a picture of a street party in Newent, but this is one from the street in Worcester where I lived.  My mother is on the photo but I was too young.  Note the air raid shelter on the right.

Dood and Pauline Pearce with copies of ‘We Will Remember Them’, the result of the hard work of several members over 2 years.

The society had a very interesting display this year about education in Newent over the last two to three centuries. Dood had put together a big selection of copied documents and photographs which told the story of the enormous changes that have taken place. There were amusing daily log books from the 19th century recording for instance that one boy had decided to miss school and boat to Hereford on the canal ! He attended the next day without mishap.

Over 50 members ( a full room ! ) had a very enjoyable evening with good food, wine and most importantly excellent entertainment from Dick Brice, pictured here with the chairman Dood who had to gently bring the evening to a close or Dick would have continued for longer.

In August 42 members had a very enjoyable day out visiting the Abbey and its photography museum dedicated to William Fox-Talbot. There was time to explore the village, much of which dates from the 13th century. This included the church, cottages, shops and several places for refreshment. Thank you Lionel for organising two excellent visits this year 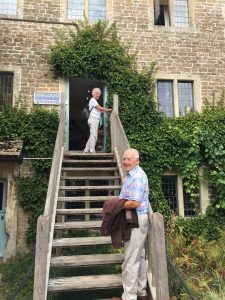 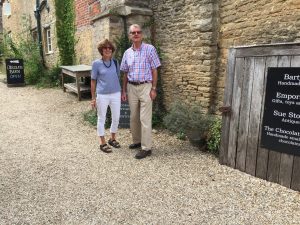 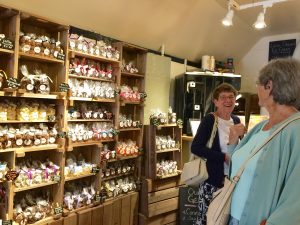